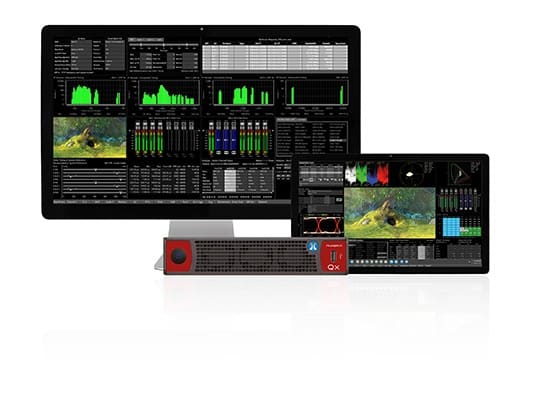 Creative Technology (CT) covers a wide variety of live events across the broadcast, corporate, entertainment and sports industries, including a lot of live music events and tours such as Kylie Minogue and Glastonbury Festival. CT began using PHABRIX equipment some years ago on recommendation, beginning with a handheld system. The reliability and functionality of this unit led the company to purchase a Qx for each of its three original PPUs.

Sid Lobb, Head of Vision & Integrated Networks at Creative Technology, commented, “PPUs need to be small for transportation, but fully-featured. We chose the Qx rasterizers because they were a cost-effective and space-efficient way of engineering 4K content and they have an excellent feature set in a great form factor. Also, engineering from a scope can be quite tricky, so having all the information on a single hi-res monitor in front of the engineer makes it much easier to take in.”

Qx is the world’s first fully flexible rasterizer for hybrid IP/SDI analysis and video/audio monitoring, offering the latest hybrid IP/SDI test and measurement tools for environments that require 4K/UHD (12G/6G/3G-SDI), HD-SDI as well as SMPTE ST 2110, ST 2022-7, ST 2059 (PTP), AMWA NMOS IS-04 and IS-05* and ST 2022-6 formats. “This flexibility is very important because, while we currently work with 4K at 12G, we will be ready as and when we add IP capabilities to the PPUs,” said Lobb.

CT is seeing the demand for 4K gradually increasing, with Lobb estimating it at currently around 20% of total projects. “The demand for 4K in music and touring is certainly growing, primarily for recording,” he said. “The LED screens that we shoot for are becoming higher and higher resolution, so they need better quality images. Similarly, screen resolution in corporate work has increased a lot in recent years.”

CT’s latest PPU build follows the same model as the others, with the Qx being part of a common hardware platform surrounding Ross Carbonite, Grass Valley Korona, Kula and Kahuna mixers, which allows for modularity and scalability of our camera systems.

“The Qx fits really well into our PPU workflow. Having a standard build also means we have one consistent kit across the fleet, so we don’t have to retrain our engineers on lots of different scopes,” adds Lobb.

The new PPU, with its Qx on board, has already been out in the field at the 2019 Latitude Festival, a Mumford and Sons tour, a conference for a major pharmaceuticals company and a Major League Baseball breakout event in London.