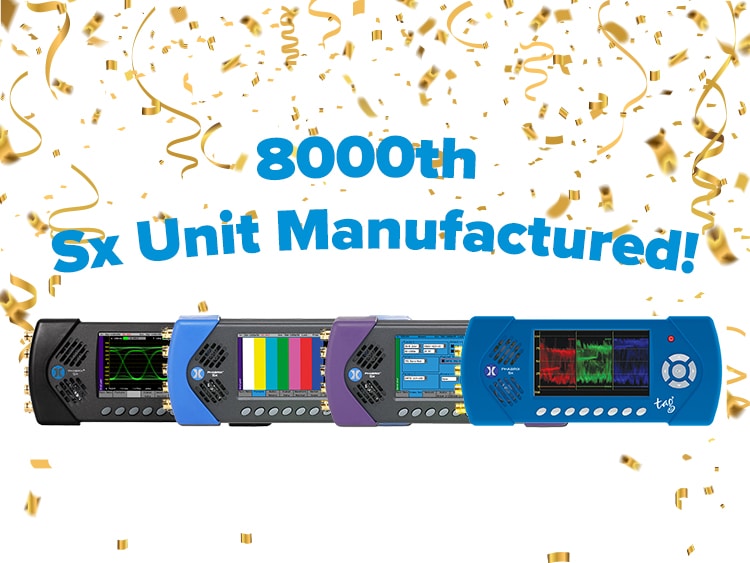 Newbury, UK – 11 January 2022: PHABRIX is delighted to announce that the 8000th Sx handheld unit is about to roll off the company’s production line. This significant milestone helps highlight its position as the industry’s most popular test and measurement device.

PHABRIX was established in 2005 by ex-Oxtel (Miranda) engineer and founder Phillip Adams who had identified a gap in the market for an effective solution to test and monitor the then new 3G-SDI signals that were starting to make an impact in the industry. The first SxA prototype was unveiled at IBC2007, with the product launching in July the following year and instantly winning the prestigious Peter Wayne Award for Innovation.

It was very much the right product at the right time. Interest in 3G-SDI was starting to accelerate, the new company had access to early silicon from FPGA vendor Xilinx (PHABRIX spelling comes from PHillip Adams BRoadcasting In Xilinx), and it was able to leverage the new chipset to produce a model that featured all the functionality of its rivals at a significantly lower price. What’s more, via a teardown of a PlayStation Portable gaming device, the new company was able to source a screen that meant it could pack all these features into a genuinely capable handheld unit.

“Our product was both a signal analyser and generator whereas most competitor’s products were just analysers,” said company founder and now CEO, Phillip Adams. “Companies had to buy a separate generator and a separate analyser which would have to be shared between staff and typically moved around on trollies. Our product was portable, and a third of the price, so companies could now afford to employ more of them. There was a real need, we knew that as we’d been developing broadcast products for many years, and we rode this new 3G-SDI technology wave. Since then, the market has evolved considerably requiring us to continually innovate”.

And now, 13 years later, the company is still making SxAs, and, almost uniquely, is still supplying them with free-of-charge software updates. The range of devices PHABRIX offers has expanded considerably as the industry has evolved, adding models and capabilities to accommodate the shift towards both new broadcast formats, and the migration towards IP.

The use cases for PHABRIX handheld devices have expanded as well, with units in operation in as diverse environments as the Sydney Opera House, the Japanese police force, the Paris Metro, NASA and SpaceX. The company has been equally successful and, despite the pandemic, has just recorded its most successful year to date, and is actively recruiting at the moment as it looks to build upon its successes.

“Our customers range from Broadcast Engineers with their own personal unit, all the way up to companies with 80 or 100+ units and they’re used everywhere where infrastructure is being tested. There is a passionate involvement with these engineers and their Sx units, probably due to the fact that they are in use during times of critical fault diagnosis, where reliability and the identification and rectification of issues is key”” says Adams.

For now, though, the 8000th physical PHABRIX unit is about to be made. We celebrated our 1000th machine by making it gold-plated, next was carbon fiber, then Yew, and there’s the Summer Games unit. These are all locked in a special cabinet at the company HQ — and we have two main candidates for unit 8000.

“I’d like to create a Perspex one so everyone can see the internal workings as there’s a lot going on in a very small space,” says Adams. “Bamboo would be a good choice too, as its recyclable and sustainable, key considerations over the lifetime of the sales of the next 8000 devices.”